Wi-Fi Sync in Enpass is a bit complicated, and its functionality depends on your network setup, software, and OS configuration. Based on these factors, you may face some challenges in setting it up flawlessly.

A few of the common problems could be:

Try these basic steps to troubleshoot the above issues:

You will encounter this error when your device is not able to make a connection with the Wi-Fi Sync Server running on the same network. Your network configuration, Firewall and antivirus settings play a vital role here. 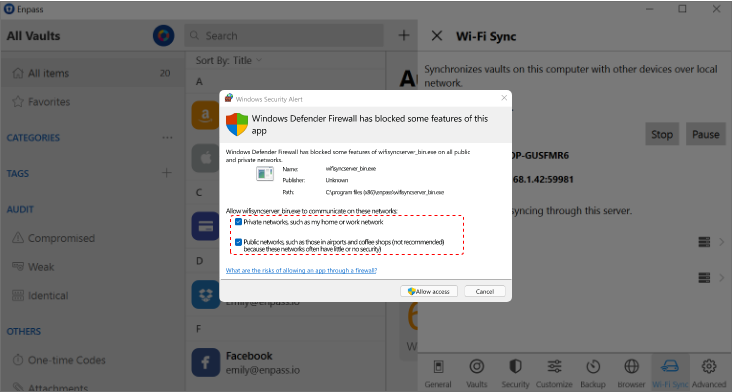 So if you haven’t given access to the Wi-Fi Sync Server to communicate through you current network, your server will not be visible to other devices and you’ll see this error. To troubleshoot this issue you need to check your network type and let Windows Defender to allow Enpass Wi-Fi sync (exe program) to communicate over your network.

To troubleshoot this issue, you need to check your firewall settings and let the Enpass app and Wi-Fi Sync Server communicate over your network.

No vault is available for syncing over the local network. 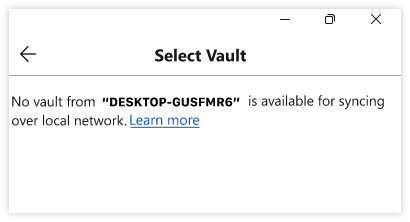 The Wi-Fi Sync server does not serve your vaults automatically over the network. You need to manually add the vaults to server to make them available for syncing. If you have got this error, it means no vault has been added to the Wi-Fi Sync Server.

To add a vault, open the Enpass app on the desktop app running the server, then go to Settings-> Wi-Fi Sync -> Select the vault you want to add to the sync server. 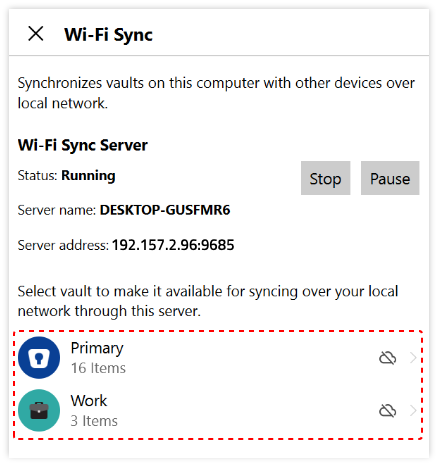 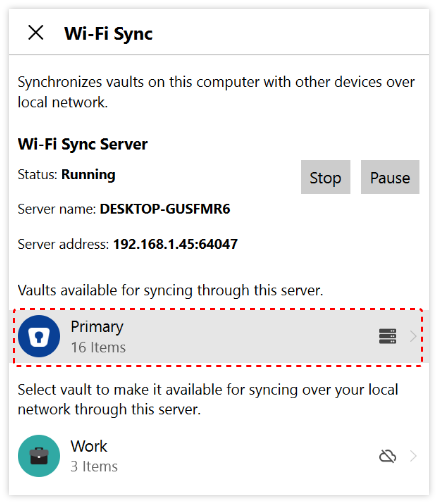 Once the vault is added, open Enpass on the device where you were getting the error and retry.

You won’t interact with “Access Password” unless you choose to set up sync manually rather than scanning the QR code through the mobile device. 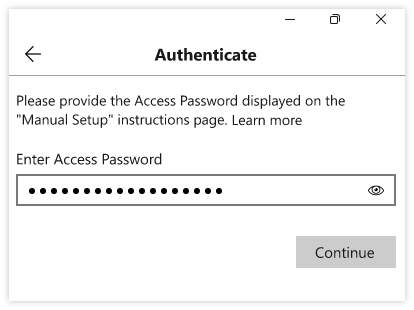 Access Password a unique password generated randomly for each vault added to the Enpass Wi-Fi Sync Server. Enpass transmits the data in an encrypted form, and this password adds another layer of security to make sure that any other communication between the Wi-Fi Sync Server and clients is also encrypted.

You can find this password by following these steps:

Getting code mismatch error while verifying the server during manual setup.

You will be encountered with this error only if you’re setting up sync through the manual process rather than scanning a QR code on mobile device.

The Wi-Fi Sync Server uses a self-signed certificate for encrypting the connection with other devices. Since there is no certificate authority involved, it’s the users’ responsibility to check if the certificate is the right one. A time-based verification code is displayed on both the devices – the desktop that’s running the server and the device which is being paired. If this code does not match, you should not continue the pairing. Also, make sure that the date and time on both your desktop and pairing device are the same or set to automatic. Disable the WLAN server in the Enpass desktop app. Then turn it back on again. 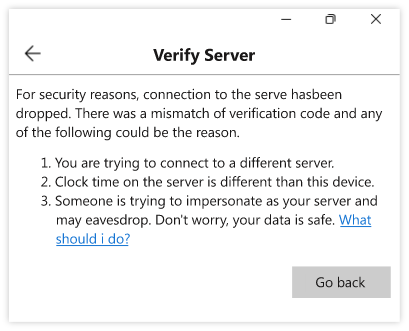 If everything else is correct, it might be a case of eavesdropping. A man-in-middle is trying to act as a Wi-Fi server. The possible reason for this is that you are sharing your Wi-Fi network with the eavesdropping party. To avoid this, you should use a private network for first-time pairing, not public Wi-Fi.